Suzi and Michael would like to introduce their babies to you and to invite you to join us as we watch these little Spinoni grow and develop.  Suzi and Michael each have an unparalleled joy for life and an over developed sense of humor coupled with a willingness to try anything I ask.  A delight to train, they also keep me laughing and they'll make you laugh, too.  To take a look at the pedigree for these puppies, just click here. 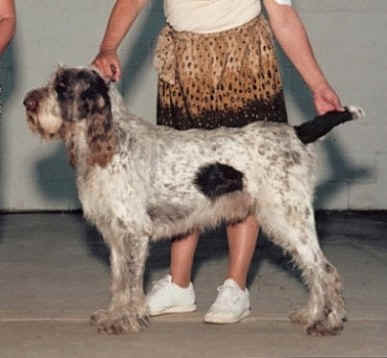 Poor Suzi had to have a C-section 'cause somebody had the path blocked.  Everybody seems to be doing well at this point though one little girl is pretty tiny.  We'll keep our fingers crossed for her. 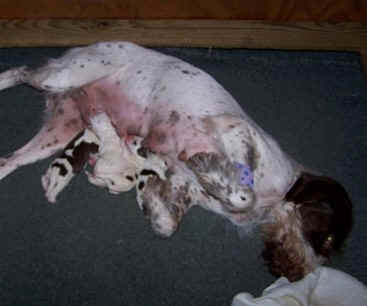 One week old and the babies have already grown quite a lot.  Even the little baby girl is growing right along. 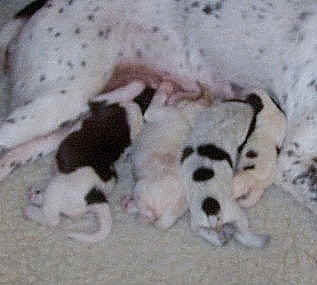 At a week and a half, the babies are making lots of progress.  Eyes are starting to open and they're starting to try to stand.  But they still sleep most of the time. 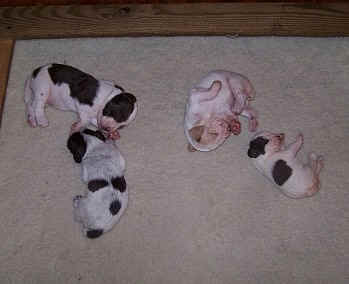 And while they sleep, they grow!

Two weeks old with eyes wide open now and starting to be more active.  I even hear some yips every now and again.  It won't be long til they are up and running. 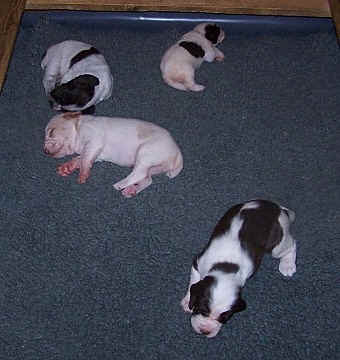 They don't stay snuggled up to one another so much now.  Just happy, content little babies. 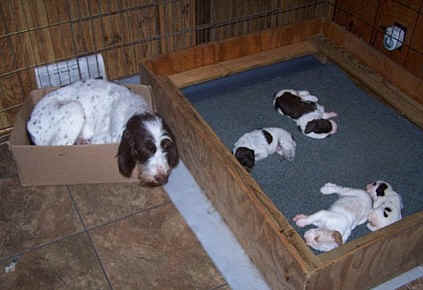 Sometimes a girl just needs some time and space to herself! 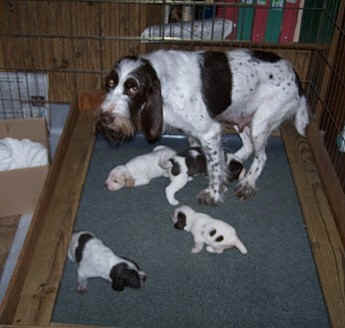 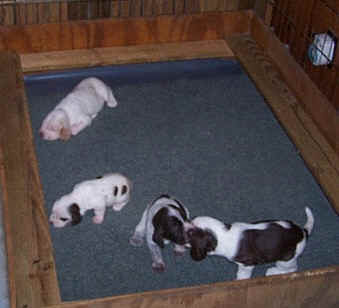 Three weeks old and the babies are starting to play and interact with one another.  And each one has managed to escape from their bed at least once in the past couple of days.  The party is about to start! 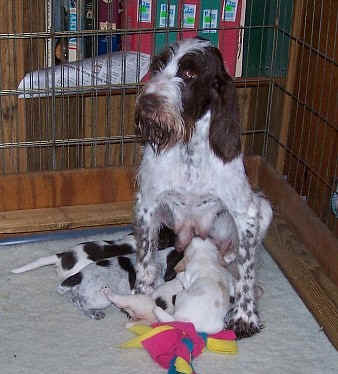 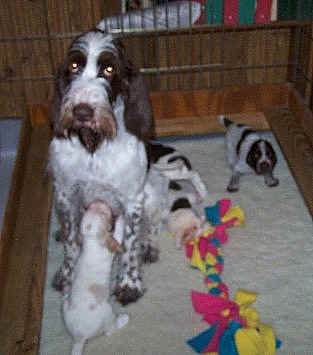 Poor Suzi with her "put upon" looks.

Solution?  Lay down so nobody can reach the snack bar. 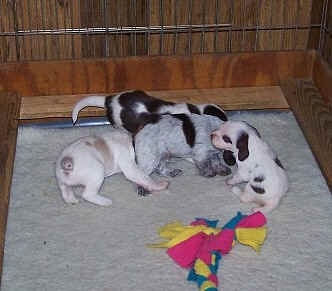 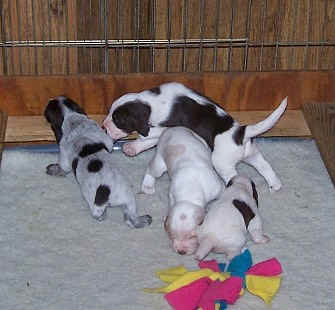 More and more often all the puppies will be awake and play at the same time. 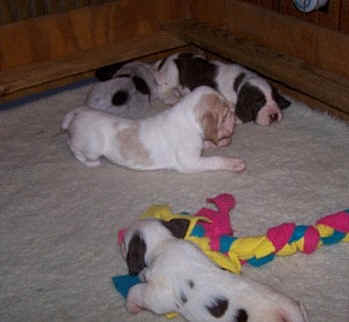 But they wind down pretty quickly and soon everybody is napping again.

This has been a busy week for the babies.  They've learned to get out and back in the whelping box and to help, I put their step down.  And they got introduced to puppy food. 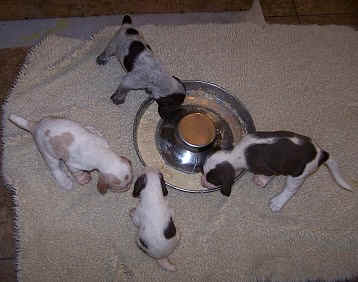 They weren't too sure about it but quickly decided that "stuff" tasted pretty good. 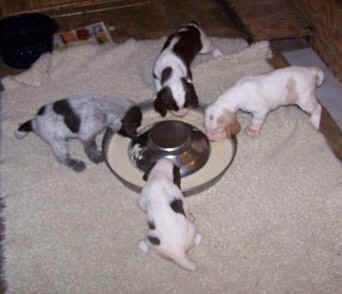 After a couple of days they really got the hang of it and now when I cluck to them, they come rolling out of the box, ready to eat.  And notice what tidy eaters they are.  I don't have to give these guys a bath after every meal! 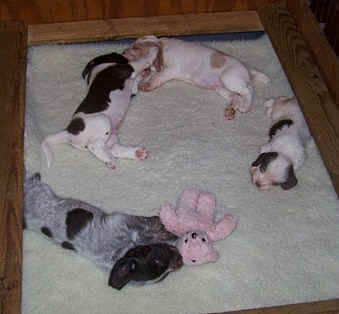 After getting full tummies, they play quietly in their bed.  Mouth games are always nice and so is "taste the teddy".  Or...sometimes only a nap will do.

Four weeks old now.  Can you tell how much they've grown? 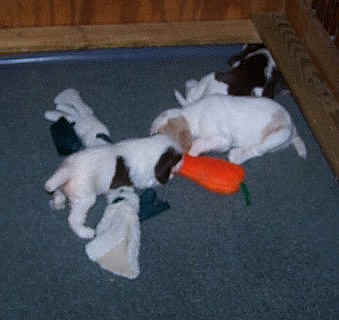 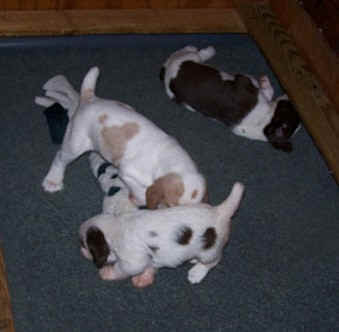 The girls are getting rowdy while the big boy takes a nap.  Hold up!  Where's #4? 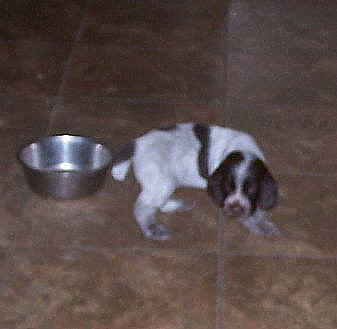 Ahhh...there he is, off in the kitchen checking to see what's cookin'.

Sorry, had a little modum problem.

Five weeks old and the horizons are expanding.  New toys and getting to play with the big dogs now.  These little guys are all over the place so, even though there are only four, I still have a problem getting them all in one picture. 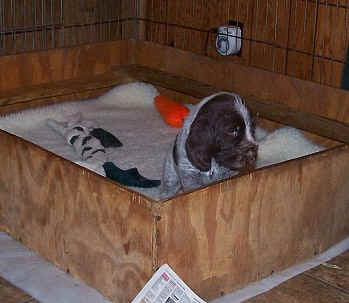 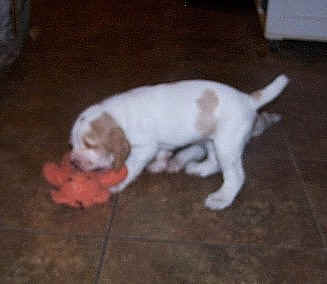 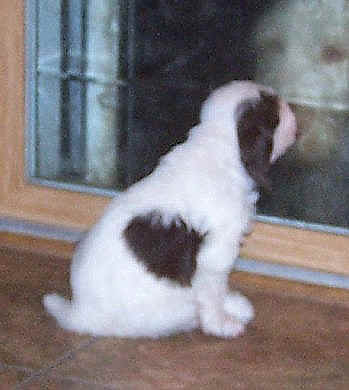 Bitsy went from wrestling with the bear to talking to Sherman through the patio door. 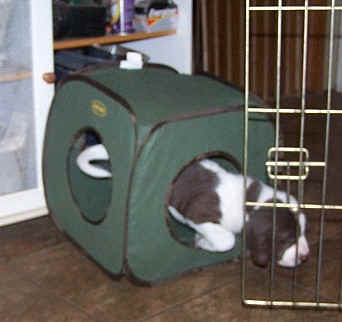 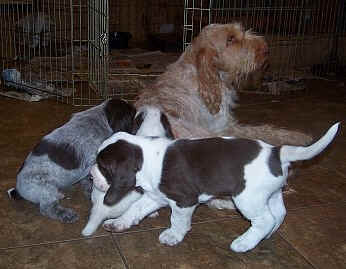 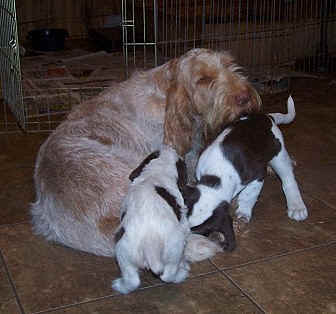 The kids are having a grand time wallowing all over Edie.  And she's such a good girl, she just lets them. 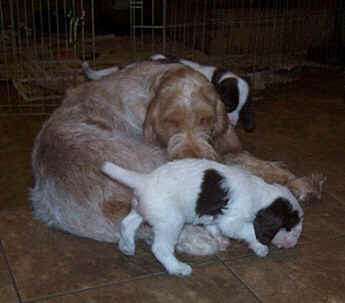 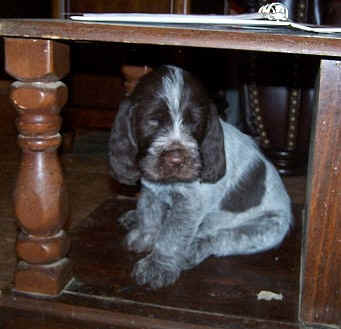 Well, they're starting to head off to see what else there is to do and Augie found a really nice place to sit.

Be sure to check back often for the latest developments as these little Italian Spinone grow.  I'll update this page at least weekly until the babies leave for their new homes.